A few days ago, Alan Rickman, more likely known for his role as Severus Snape, passed away . I would prefer to remember this fine British actor as a “male ally” who unapologetically said, “There is nothing wrong with a man being a feminist, I think it is to our mutual advantage.”

His quote is especially significant given that the entire past week we spent in understanding the concepts and values of peace and conflict, and the important role gender has to play in conflict resolution.  We were extremely fortunate to have had great instructors in Prof. Tom Woodhouse and Mrs. Irene Santiago.

Prof. Woodhouse is the Founding Director of Centre for Conflict Resolution at the University of Bradford.  He has written several books on conflict resolution and much of his research is concerned with an examination of the relationship between peacekeeping and conflict resolution.

Irene Santiago is one of the few women in the world with personal experience in formal peace negotiations and was one of the 1000 women nominated as a group for the Nobel Peace Prize.  She is well known internationally as a strong advocate of gender equality to transform society through her work as Chair Emerita and CEO of the Mindanao Commission on Women and convener of the national Mothers for Peace movement.

We started the week with a personal introduction, which I found extremely interesting and insightful.  Each of us had to state: “My sisters and brothers, I have come to this gathering to share peace.  I cleanse myself of _______.  I am _____, proud to be a member of this batch of Rotary Peace Fellows because ______.  My peace idol is ______ because ________.”  Not only was this powerful but gave me a better understanding of who my classmates are, what drives them and how I could collaborate with them.

Over the week, we went on to understand our own personal conflict resolution styles as well as a deeper insight into our own biases and limitations.  Through a mix of theory, practical case studies and reflections, we were able to discuss the causes of conflict and the impact of gender.

Some of the discussions were quite passionate – most of the women participants, including myself, had several examples to share of the gender inequalities and stereotypes that exist in our countries or the countries we work in.  A few of the men felt that the discussion was all about women and there was a feeling of being excluded.  As peacebuilders, peacekeepers, peace negotiators, etc., we would have to put our inclusive gender lens on all the time.

Women’s life experiences as community leaders, mothers, wives and daughters are an important element for durable peace.  Women bring to the negotiating table issues that are not seen and experienced, and so will not be brought up, by men.  Issues about how we relate to one another, how we live and give and allot resources, how we govern, and how we resolve our differences peacefully.

Studies have shown that when women are involved in peace negotiations, conflicts are resolved quicker and the solutions are sustainable in the long run.  There is absolutely no reason why 50% of the population are excluded in policy and decision making that will affect all.  Yet it is shocking that women were only 4% of signatories of a sample of 31 major peace processes around the world between 1992 and 2011; only 9% of negotiators have been women and 2.5% of chief mediators.

Throughout the week we had several examples of how women have used creative ways of expressing their concerns and having them included in peace processes.  For example, Nobel Peace Prize winner Leymah Gbowee mobilized an inter-religious coalition of Christian and Muslim women during the Second Liberian Civil War in 2003.  Under her leadership, thousands of women dressed in white, staged pray-ins and nonviolent protests demanding reconciliation and the resuscitation of high-level peace talks.

Our classmate Asmara had a lovely story to share.  She said her name meant “the city of peace” and was about a place in the Horn of Africa where there were four villages that were constantly at war.  The women of the villages wanted peace and decided to leave their villages and set up a new village in the centre and they named it Asmara. 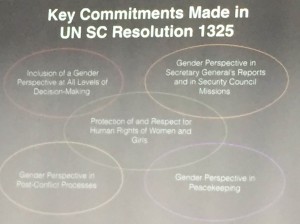 We were also introduced to the United Nations Security Council Resolution 1325 on Women, Peace and Security.  The resolution reaffirms the important role of women in the prevention and resolution of conflicts, peace negotiations, peacebuilding, peacekeeping, humanitarian response, and post-conflict reconstruction and stresses the importance of their equal participation and full involvement in all efforts for the maintenance and promotion of peace and security.

Resolution 1325 urges all actors to increase the participation of women and incorporate gender perspectives in all United Nations peace and security efforts.  It also calls on all parties in conflict to take special measures to protect women and girls from gender-based violence, particularly rape and other forms of sexual abuse, in situations of armed conflict.  The resolution provides a number of important operational mandates, with implications for Member States and the entities of the United Nations system.

Nevertheless if we are to achieve the Sustainable Development Goals, especially SDG #5 – Achieve gender equality and empower all women and girls, we will have to use all instruments available, including Resolution 1325, to ensure women participate actively in all aspects of decision making and peace negotiations.

I am so thankful that I am part of this course as it is giving me new insights and tools to strengthen my work at Safecity where we are aiming to make public spaces safer and equally accessible to all, especially women and children, through crowdsourced data, community engagement, and technology.

ElsaMarie D’Silva is the CoFounder & Managing Director of Safecity that crowdmaps sexual harassment in public spaces, and is a 2016 Rotary Peace Fellow.  You can follow her on Twitter @elsamariedsilva